And, for those environmental pessimists who believe the end is near -  Relax. We have good news.

We have again made contact with Neil Macleod - Head of Water and Sanitation - Durban Metro in reference to a number of issues, including policy, septic tanks and the package plant industry.  We would have liked to include his response in this newsletter, but his insistence that it be included complete, without editing, would have made this newsletter a long episode. This is not the theme for the Wastewater Watch as all our reports are kept short, sweet, and to the point. We are prepared to include his response on our website, and will publish the email, complete, as soon as we can upload it on the website.

However, Mr Macleod did claim that the Department of Water Affairs has not "outlawed" septic tanks (soakaways).

In typical government fashion - deny everything, admit nothing and cover your ass. We recall ex-President Mbeki claiming that HIV did not cause AIDS, despite what the world said.  America recently spent millions removing failed "leach-fields"  (soakaways) because of pollution, yet we deny it has any adverse effect.

We will regret this!

At the end of June, the above Clear Edge plant was emitting a foul smelling effluent.  This plant is not working and is polluting our environment. We will now tackle Wimpy, as they contribute.

We found that Sandra was probably the most respected of all those in authority. She headed the testing / endorsing of package plants within the Durban area, and therefore there was no one more qualified to judge a system than her. Sandra now works for Engen, and we find it unbelievable she was not consulted by Engen when the N3 replacements were selected.

We wrote to her :

I have not made contact with you since you left Durban Metro.  I have to admit that of all the Metro staff, you were one of only a handful who we felt had integrity.

As you must be aware, we help write a newsletter, the Wastewater Watch, which highlights wastewater issues. One such issue is the two Engen 1Stops near the Tugela Plaza on the N3.  Two Clear Edge systems were installed there in about 2005, and were removed after several years, as they had hopelessly failed. Two new Clear Edge systems, upgraded to 3 times the size,  were installed recently (2008) and show the same results. I was there yesterday, and the final effluent is pretty foul.

As you came from a job in which you scrutinized, selected, and then judged systems, including Clear Edge, it would have been highly beneficial for Engen to have consulted with you.  There would have been no one more qualified to offer input than you, and yet the same mistake has been made.

I have just spoken to Samantha from Magna Carter in Cape Town (Engen PR) who said she would pass the message on to Engen.

It is just this situation cannot continue. If Engen are not going to do something, we will approach the likes of Wimpy, who contribute considerably to the pollution, and tackle them.

We have not received a response. Ed

Despite the efforts of all conservationists, the general public and the environmental program 50/50, the Northgate estate, near Kimberly, will go ahead.

Already, foul water is reaching the dam, and this is expected to deteriorate further.  The package plant, a Lilliput (as understood), will treat the domestic sewage from this phase, and will discharge the "treated stuff" to another pan, 20 kilometres away. The idea being that the flamingos would have an alternative breeding ground.

If the Lilliput plant does not treat the sewage properly, and then the water is dosed with a hefty dollop of chlorine, which is then pumped into a pipe 20km long, the water reaching it's final destination would not be conducive to any life form.

There is good news - We know where the system will be, and we will monitor it's progress.

We re-opened the Green Drop issue last month, noting that of all the municipal wastewater treatment facilities in South Africa, only 30 managed the Green Drop certificate.  Now, we believe, there are, in fact, 32.

Department of Water and Environmental Affairs said, "Green was chosen as it is the colour universally used to portray a healthy environment. It thus implies that should a municipality achieve Green Drop status, the public can be assured that the authority is excellently and responsibly managing its wastewater services, and is doing so to the benefit of the environment and the people.

The department’s Mariette Swart said that the Blue Drop and the Green Drop status will restore trust in drinking water quality and wastewater management services."

Neil Macleod, Head of eThekweni Water and Wastewater proudly informed us that his department had managed 11 Green Drops of the 32 nationwide. This is a huge achievement considering that less than a year ago not one of the metro's sewage systems achieved compliancy with the Water Act - according to the Water Quality Management System (WQMS) - initiated by the Department of Water Affairs.

"The Department of Water and Environmental Affairs will be releasing the so-called ‘Green Drop’ report into the state of South Africa’s wastewater management and services next month." Engineering News 26th June 2009

We are all familiar with the Durban Blue Flag fiasco, which was replaced with Durban Metro's own rating, because the authority could not comply.  The Blue Flag status is awarded to beaches which comply with, among other factors, cleanliness of beaches, public facilities and water quality. No-one likes swimming in toilets, and Blue Flag International  disapproves of "toilet water" beaches.

The new method of awarding compliant wastewater systems is  now suspect, and does little to "restore trust in drinking water quality and wastewater management services". Similar to the school leavers Matric certificate, we lower the standards until everyone passes. We will regret it! Ed

We wrote to Allan Batchelor, Wetland Consulting Services, who strongly promoted BioBox in his marketing campaign. The email was also forwarded to David Light, BioBox manager.

As you are aware, we assist with a water related newsletter, the Wastewater Watch, and offer you the opportunity to comment on the following:

All comments should be short and to the point, but if you choose not to comment, this will be noted. Your response, if any, along with the above will be published in our next edition of the Wastewater Watch.

We have received no comment. However, so unique is Biobox, this picture shows a logo of a dung beetle, borrowed from another supplier - Scarab. Ed 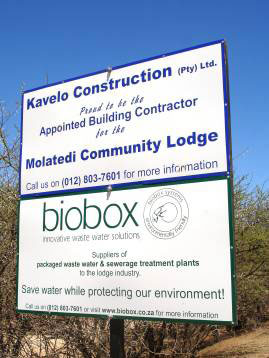 After 25 years, the worlds longest running environmental program - Worldwide -  has been canned by the new Zuma government, claiming lack of funds.  The 50/50 team has kept us, the public, informed on all environmental issues for longer than any other program. Shady deals, government corruption, and dirty politics has the final say, and the weekly show closed the doors on transparency.

The new eThekweni Water pipeline from Umlaas Road to the western area of the Greater Durban area is progressing well. Rated the most ambitious water project yet undertaken in this part of the world, the R 800 million pipeline will deliver 400 million litres of water per day.

There can be little doubt.  The authority have heavily splurged on water related projects, ensuring the population are well catered for.  Tax and ratepayers should feel a little more comfortable knowing that not all the money was spent on street renaming, defunct public bus service, and once off soccer stadiums.

We also need to look at the environmental impact of this project, which does not look not so green.  The 400 million litres per day will be removed from a relatively clean source, kept clean in the pipeline, so that it will reach several destinations in good condition.  The ultimate destination is the Inanda Dam catchment area, a point the water would have reached anyway, without the pipeline, and without the contaminated pollutants. The pipeline simply bypasses the badly polluted area.  And therefore, the removal of 400 million litres of clean water from a polluted area reduces, considerably, the dilution of pollution in the river. In such concentrations, the pollutants could now destroy the whole river ecosystem.

And there is some more bad news. 400 million litres of clean water, given to a population that either does not know the value, or does not care, will transform a Blue drop into a Brown Drop (or long drop). And then, considering the track record of Durban's management, there will not be the allowance for treating this huge burden of additional sewage.

The country is in a panic to get delivery of services, for political reasons. The early ANC government put a tap in every village, and won votes. The fact that clean water was transformed into untreated sewage did not worry the authority, or the public. Some 10 years later, we are seeing a repeat.

It should be noted that the Duzi canoe marathon uses some of this water in the famous race, but maybe, now, the paddlers will opt to run the race instead.

We need to save our water resources, instead of spending. When water no longer fills this pipeline, and the river is dead, it will be too late.

It is therefore ironical that Tiger Brands slogan is;

I wonder what goes into their chocolate. Ed 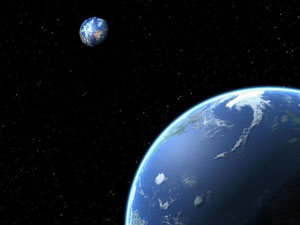 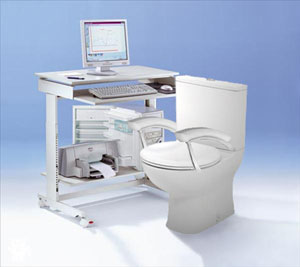 This was sent in to us by Michelle, Gary and Peter. Peter asked if white suited us.

Thanks, Pete. Also thinking of you. Ed