2000 years ago there were an estimated 200 million people on this planet, and the world was in balance.  We now have nearly 7 BILLION people.  The fact that each one of us contributes to the imbalance, using cars, coal fired / nuclear powered generators, all adds up.  But what about people themselves.  On average, every  body  contributes 5 degrees of heat to the ambient temperature around us, and we continue doing this non-stop - 24 hours a day - for 70 years.

This is a generator of gi-mammoth proportions.

We did get a response back from the Biobox team, headed up by Allan Batchelor.  He did say that he denies promoting Biobox through his own company, Wetland Consulting Services, but if he did, it was in the same context as any other product or technology.  On the subject of the borrowed Dung beetle logo from another supplier, Allan said that the Biobox Dung Beetle logo has since been discontinued.

Allan did promise to address all the other Clear Edge / Biobox issues later, and we await this response.

Revisiting these two Engen sites again in July, we found the situation deteriorating alarmingly.  The water in both dams that receive the "treated" effluent are green.  Algae has now completely covered the water surface.

In an attempt to replace the depleted oxygen content in the water, the management opted to install a small submersible pump, (see below) and to squirt water back into the dam. 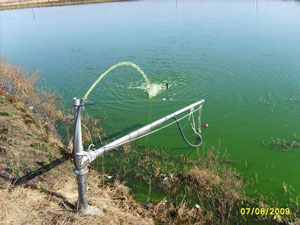 It should be noted that at the far side of this dam is a extraction point for drinking water for the 1Stop.

The Department of Water Affairs should bestow a "Green Drop " award on Engen / Clear Edge for their highly successful efforts to convert healthy ecosystems into a watery wasteland, and very green.

Then,  Engen's Clear Edge system on the other side of the N3. 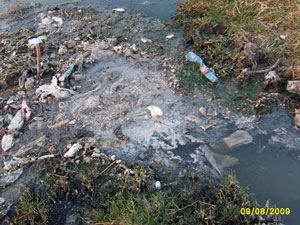 Then, the treatment plant installed at the Engen New Castle 1Stop was overflowing sewage from one of the tanks, and this was reaching the water course. 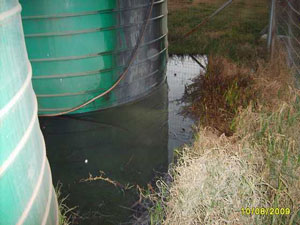 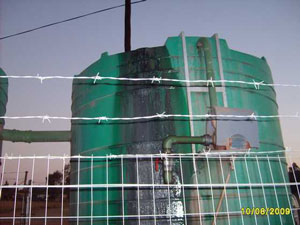 Please note. All faults were recorded within a 4-day period.

Engen are not taking us seriously enough. We then calculated, that between 8th July and 10th August 2009, we supported Engen by buying R4948.07  worth of fuel.

This needs to change!

We have not heard from Engen's Enviro manager, Sandra Redelinghuys, but we will make contact with her - in due course. ED

We received feedback that a developer was installing a SABS approved Lilliput system in Mozambique.  Follow the link below http://complexo.co.za/Tres/complex.htm

We contacted SABS and the developer,

Andro Gibhard of Complexo Investments, telling him there are no SABS approved systems and he should retract this from his website. He said that he only repeats what was offered to him.  Andro wrote - verbatum;

"You have put our development in a bad light with the people that you forwarded this mail to and I urge these people to disregard your childish behavior any claims made against my development."

"And please take it very seriously that we will pursue legal action against you should any other allegations arise from your actions".

Cc: 'Damila Padayachy' ; 'Esme Kruger' ; This email address is being protected from spambots. You need JavaScript enabled to view it.

We thanked Andro for his response, saying when we are threatened with legal action, this means we are taken seriously. However, the website still claims SABS approved Lilliput systems, and, surprisingly,  SABS have made no effort to contact with us.

We received the news that a German designed system for treating domestic sewage had reached sunny South Africa. This system called   Biorock, is imported and marketed under the Biobox banner.

To set the record straight, we have not seen this system and have no data on it's performance.  We will only repeat what Biobox say, and, of course, offer our response.

Features of the Biorock include:

The BIOROCK doesn’t need any electricity at all for the process. It relies on gravity and natural air flow to work. This saves several hundred Rands/year even on small single house sewage plants.

The BIOROCK primary tank (with pre-filter) requires a desludge about every 3 to 4 years. As a result it will save a huge amount of money on the running cost.

No machinery throughout the entire sewage treatment system.

The plant can accept tampons, panty liners, wet-wipes, cotton buds, etc. due to the fact that the system includes a settlement tank (septic tank) which acts as a trash tank, keeping these out of the sewage plant. The system uses an effluent filter which means that a single chamber tank is acceptable.

Small lid, flush with the ground. No compressor, so no kiosk.

Where a pumped outlet is required, the Biorock can use SOLAR POWER not mains electricity!

This system will produce effluent to a 10:10:10 (BOD, SS, NH4) effluent standard. The general minimum standard is a 20:30:20 standard; this is what 90% of package units will achieve. The effluent from the BIOROCK is twice as clean as most of the requirements.

Completely silent operations as there are no electric pumps, motors or compressors.

This is the cheapest system in the World to run - NO electricity, minimum annual maintenance.

For most Sewage Treatment Units wastewater must be flowing through them for about 6 – 12 weeks before the bacteria establish themselves and the plant is working properly. The BIOROCK natural fibre material is pre-seeded with these bacteria and has a start up period of only 24 hours. This has enormous benefits for systems that will experience periodic or seasonal use as nearly all conventional systems will fail to meet their discharge consent standards for several weeks or months when occupation resumes. The BIOROCK will be fully functioning in 24 hours and remain functioning, even after 7 months without use.

This is a European Community approval for small wastewater treatment systems for up to 50 PE for Prefabricated Tertiary treatment units. Excellent purification results are available. Not many plants have this.

The maintenance on a BIOROCK is lower than any other plant. This saves the owner money and reduces carbon emissions.

Without question it is the most sustainable system available.

The BIOROCK can be used as a Septic Tank Conversion Unit.

The Biorock appears to be a well made system, designed by the Germans.  The fact that it does not require any electricity and that it is buried is sure to be a good sales feature. The authorities / buyers could very well endorse / promote this system for widespread use.

But, does it conform to SA requirements?

Biobox claim it can treat to these standards

Then we have the disinfection part that is not even mentioned by Biobox.  Many European community countries are not concerned with bacteria, and many systems coming from Europe simply do not disinfect. Based on this alone, this plant is non-compliant with South Africa's water laws.

Furthermore, it is designed and installed with a single chamber septic tank, which is also non-compliant with the building regulations.

And then it comes with EC certification, which allows discharge of  20 (COD):30(SS):20 (Ammonia) into any European stream.

Our EU contact in Finland commented on the need for systems to remove Phosphates as the prime mission (Ammonia and eColi removal is an after-thought).

He commented, "The authorities, concerned with food security, offer the population very cheap fertilizer, which contains phosphates. Phosphates are now reaching the many hundreds of lakes in the area, causing rapid water-plant growth."

On a final note, South Africa are pioneers in the field of water treatment technology, and for us to import non-compliant equipment, in our opinion, should be considered insulting. But, considering who the importers are, maybe it's complimentary. Ed

ps When something sounds too good to be true, it usually is!

The list of germ killers below that claim to be safe for septic tanks:

We received this from Michelle, which originally came from Kim.  It was a letter written in 2070 which told a story of what life is now like, some 60 years in the future. It is in Power Point presentation, and you can read it here

The standards authority, SABS, could suggest a French connection when bestowing it's Design Institute (DISA) awards. 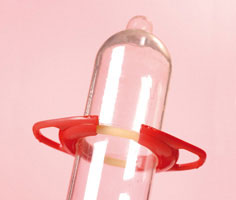