Green Drop programme and another on the new Water Institute of SA's (WISA) division on small waste water treatment works (SWWTW) - both too lengthy to fit into our short & sweet format.

As the SA leadership fails to lead, the civil servants fail to serve, all those of influence are becoming richer, the poor are becoming poorer.  These "grass roots" know they should be getting a better deal and  are now demanding it. Standerton, Ogies and Balfour riots are just the spark needed for a massive revolution, and this has shaken the ruling (unruly) party. These poor people are demanding water and sanitation, amongst other things, and after 15 years of empty promises, they are getting restless. Anthony Turton (ex-Water expert at the CSIR) was fired for suggesting that future political unrest could be water related.

No attempt has been made to get the Clear Edge system to function, and despite all our correspondence to the Engen men, we have had no response from them.  Even Sandra Redlinghuis, the most qualified and experienced Engen employee (on package plants), has failed to respond.

Our recent visit to the two sites on the N3 (Tugela toll road, and the Newcastle 1-Stop showed little improvement. In fact, the one N3 site was decidedly tatty, with the forecourt canopy missing and the driveway all broken up. Quite seedy. We are now presuming that Engen have not performed well in the market place and are allowing their operations to become run down.  This is good news, and our thoughts of Engen quitting the petroleum industry are reinforced by their sponsorship of a cycling program, Pedal Power on TV. The theory that we all return to our own level of competence, might just have substance.

We have also not heard from Wimpy, and suggest they might follow close friend's Engen's example and quit the pollution industry.

And finally, Mat Carlisle, the owner of Clear Edge systems, is a highly competent and accomplished water sportsman, and has even been labelled as a "Duzi Legend".  He should know how water should be treated.

The Green drop awards were implemented way back in 2008, designed to publicise the need for good wastewater practice, and since then, the report has never been seen by the public eye.  In fact, it is only in February 2010, that the first version of the test criteria was published. We can then assume that those who claim to have achieved this standard, are dreaming.  Durban Metro claim 11 Green drops. But it appears no-one really knows, even the Minister of Water, Ms Buyelwa Patience (patients) Sonjica. who issued this written report, has not made her mind up.  We quote;

" 7% (now it's only 3%) of the assessed WWTW achieved the Green drop status. The breakdown of the 32 systems that received the status is as follows:

Because of this confusion, we will (not) ask Neil MacLeod for confirmation, and do not expect a list of those facilities that are compliant, so we can check them and then count them.  We take nothing for granted, particularly if it comes out of the mouths of Durban Metro.

On this note, we again mention that Neil, a highly qualified water professional, has opted to discard these qualities to become a political appointment, by his boss "Mad" Mike Sutcliffe - Durban city manager. And, like all political appointees, this high life can be cut short, as quick as a blink. And when Mad Mike gets the boot, and Neil starts looking for a new job, he will dust off his qualifications.

Despite all the criticism leveled at MacLeod, we have had no response from him, and suggest he feels that what we say is of little consequence.  No problem, but note : this newsletter goes on the internet, and we have now attached a photo so that there can be no mistake, to anyone in the water industry who may have the opportunity to receive his CV.

The Presidency is about to nominate Commissioners who will serve under Mr. Trevor Manuel in what will be called the Planning Commission. Dr Turton - Vice President of the International Water Resource Association (IWRA).  wrote;

"I have been asked by some citizens if I will serve on that Commission and my answer is yes, on condition that I have a specific mandate from society. I cannot do this alone. "

We appeal to all those concerned people who wish to have Dr Turton look after our water, please make contact with him.

This email address is being protected from spambots. You need JavaScript enabled to view it.

It is comforting to know that Dr Turton is still willing to help a government who fired him. Ed

Some 12 years ago, we were asked to look into a problem with roof tanks on a Durban high rise building, as they were developing a sludge type "growth".  We found that, although this was not a new installation, the white fibre-glass tanks had developed a six inch thick algae looking scum layer, which floated inside the tank.  The owners were very concerned, as this mess found it's way into the drinking water, the toilets and washing basins.  We recall asking Durban metro for comment, who told the owners to paint the tanks black, so as to reduce the light, and there would be no growth. This was done, and the problem was resolved, until now.

We have 3 reports that this problem has returned, two are as yet, unconfirmed. This 12-year issue has to be investigated as this was about the time when Durban introduced water from Inanda dam into the Durban supply.  The Inanda water, which is highly polluted (and now has excessive amounts of mercury), has been described as unfit for human consumption and too expensive to treat. The human pollution comes from the catchment of the 5000 families, and their long (brown) drops.  The industrial pollution comes from  unregulated industry upstream, and failed municipal water treatment systems.

Should we find this water in our taps, then this is very serious.  We are very short of (good) water and we are not being told. Instead, Durban metro offer 9 kl free water each month, and anything over this limit is revenue. If our council asked us to save water, this would reduce revenue, and is simply uneconomic.

And, as reported previously, Umgeni Water has installed a pipeline from Durban to Umzinto (South Coast) to deliver Inanda's foul water to this very dry area.

"And to those that receive, should be truly thankful" Ed.

Madibeng Municipality (which incorporates Haartebeespoort Dam and the town of Brits) was recently hit by numerous protests, with residents demanding better service delivery and the removal of the mayor for failing to deliver. A rates boycott by CORPA is now in force and the Minister of local government has quickly tried to resolve this problem, before it becomes infectious.

CORPA (Concerned Ratepayer Association) have a news page on their website ( www.corpa.co.za ) and 9 of the 17 reports are specifically water related.

This is a new option for those that feel that their leaders should rather spend our cash cleaning up water systems as opposed to bailing out cash-thirsty water fun parks.

The planning of a hospital in the outer west suburbs of the eThekwini area, could have been considered an asset, as the nearest full medical facility is probably Westville Hospital.  Whilst there were a number of serious objections, the R 500 million project went ahead, anyway. 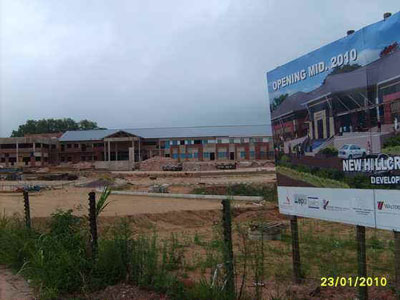 One objection was the proposed wastewater disposal method, and at this point we must stress that medical wastewater is particularly noxious, and particularly difficult to treat.  Each patient will (according to National Building Regulations) generate up to 500 litres per day- over twice the normal rate, and which will contain antiseptics / blood / skin tissue, and some of the really bad stuff like cholera, TB etc.

During the approval stage, we were asked, by a concerned resident, to comment on the possibility of vacuum tankers being used to ferry the effluent. This was a silly idea, and would not have worked. As understood, the daily volume would have required the use of as many as 10 large vacuum tankers (or fondly called Honey Suckers), every day, collecting and then transporting full loads to the Queensburgh WWTW some 22 kms away. This would have been unworkable.  The roads, particularly in Queensburgh, would not have taken that sort of punishment, and should there have been a single day when transport was not possible, serious pollution would have occurred. And, Metro do not have a spare 10 trucks (they do not have any buses, either). The option of pumping the dangerous product to the Hillcrest works (only about a km) was rejected by Metro, as this facility is already badly run and way overloaded. We heard nothing more, and the project went ahead.

Due to open in mid 2010, the project stopped in November 2009, workers cleared off site and silence reigned.  Rumours surfaced about the money men behind the project pulling out, leaving the contractors unpaid.  Then, a notice appeared in the local press.  The developers were appealing against a ruling, by the local development board, who had rejected the proposed method of treatment.  It is understood that the developers went ahead with the project in the hope that they could bulldoze trees, plants and sewage treatment, at will. 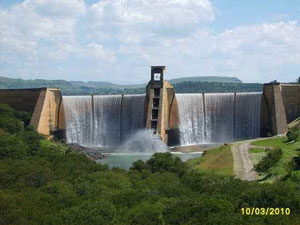 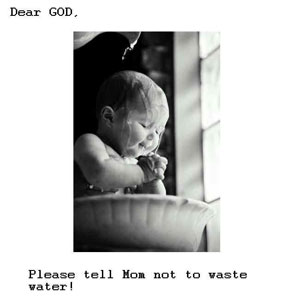