And despite it being used and used and used, it will never wear out or change it's properties. It will always be just that, water. And in a world where 70% of the surface is water (more with global warming), only 1.2 % is tasked with the above duties.  Why is it that we allow it to be abused?  Only when wastewater no longer has waste in it,  is there any value.

"When the well is dry, will we know the true value of water"

Our second "Polluter of the Year" nomination, Troy Govender, the Eskom environmental officer in KwaZulu Natal, promised to look into the problem of failed package plants, (of which Eskom have a number, and still continue to purchase more).  This was over a month ago, and we hope that he has not forgotten about it. We haven't.

Mat Carlisle , from Clear Edge, contacted us with info on his systems, claiming that he has improved the quality of his products, and that all but one now complies with Department of Water Affairs (DWAF) limits.  And Mat supplied test results of several systems as proof, but as we pointed out, some results were issued by the  eThekwini Scientific Services  Laboratory (see Blue Flags below) and should not be taken seriously. Our initial tendency is to mistrust these results, but we need to believe that suppliers must take responsibility for failed systems. It is inevitable.

And we appreciate that, for Mat to come back into the lions cage, has taken courage. We will look into these claims, and get back to him.

In the latest blue flag fiasco, eThekwini's weekly propaganda mouth piece "ezasegagasini"  has reported that our much respected water and sanitation chief, and our first nominee for 'Polluter of the Year", Neil McLeod, is to handle this hot potato.

Neil is to set up new signboards to reassure public on the state of our shores, to include weekly updates on water quality and cleanliness.  He also noted that the costly and impractical methods used by the city to detect polluting bacteria would need to be changed. All water tests would continue to be done by the City's Scientific Services Laboratory.

It is really good to know that the Sanitation chief is quite concerned about the Blue Flag issue. We, however, note the following;

We are well aware of the costs of water samples tested for eColi. These should be no more than R150 per sample, at a commercial and independent lab. And it is a simple "grab" sample. Impractical and costly ?  You decide !

Then there is the case where the city manager, Mike Sutcliffe, demanded that the Blue Flag organization accept the City's Scientific Services Laboratory results and not an independent source, after the "Blue Flag" results showed massive non-compliance.

Maybe we should recount the vote until we win. Ed

We have to ensure all those 2010 visitors rush to our clean beaches and safe water, and should they ask if we have Blue Flags, we can now proudly point skyward. And they are blue. 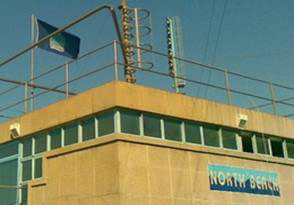 Our exhaustive research on sewage treatment systems reveals that the South African products are arguably the best in the world. And we have really scratched for something better.

Recently, we were approached by an English supplier who had what looked like a quality product.  In his specifications, he did not list any form of disinfection, because "we do not need it in the UK ".  Also that the ammonia limit was set at 20 mg/l (SA standards are 6). We often see results of 0.1, and commented on this, to which he became quite excited.

Why is it then near impossible for our applied technology to be scooped up by the West. Again our research shows that there is a perception that we have lied about our products. One supplier has claimed SABS approved, and patented, and had 100's of satisfied customers, and when tested by Umgeni Water, logged nearly two faults per day for six months. And another supplier claiming to have the best system, despite having the largest number forcibly shut down, and there are few products that do not claim to be DWAF approved / compliant. We lie, lie and lie.  And while those overseas have smelt the rat, we continue to supply these systems into  Africa where the Dark Ages is only just seeing a little sunshine. We need to be honest in the market place, and then we will gain some lost credibility.

Has this type of newsletter furthered the interests of the industry, and ultimately the environment?

We hope so.  The world is looking at us for answers, and highlighting problems as we have, shows there is a little integrity remaining within South Africa 's water care family .  Contamination of drinking water is a massive problem worldwide, and South Africa  does have the technology that can compete anywhere on earth. Our leadership in this field is failing because our leaders in the industry have failed. Ed

Last month we supplied information on germ killers that claim to be safe with septic tanks.

Well, the same manufacturer of Harpic and Jik - Reckett Benckiser - also manufactures Finish dishwasher detergent, seen recently on national TV with former Miss SA, Claudia Henkel in a prime time advert. This time, Reckett Benckiser claim that automatic dishwashers use 50% less electricity, and ten times less water than hand washing. And if you have ever wondered what happened to that advert, you won't see it again.  It has been banned by the Advertising Standards Authority (ASA) for telling lies.

Adcock Ingram (Jeyes brand) should also not be ignored either. Owned by Tiger Brands, this company is not squeaky clean either, having been caught price fixing daily bread, and then fined R99 million for robbing the poor.

Try Plaxo. This software allows you to change your contact details, address or occupation without losing touch.

It's brilliant and it's free. Link below.

And No.  We do not get commissions. Ed

Erwin, from Mpumalanga , asked if we know of some environmentally friendly products that could be used.  We rushed out and looked, and found just one (but there must be more).  The Enchantrix range of products appear to be good for nature, so I bought a bottle of "Germ Buster & Loo Cleaner" for research, at Health Choice - shop 234 - Pavilion in Durban.  Not being a chemical engineer, I can only guess what some of the ingredients are. There is a website www.enchantrix.co.za , and if anyone would give us some feedback, it would be appreciated.

Plaxo remains the most successful freeware, to help you maintain your email contacts. Keeping you in touch, no matter where you go. And as freeware, it is free! Link below.

( there is nothing fresh about it! )

Reckett Benckiser comes out as -

Next time,  we will take a peek into a can of (water) worms, labeled ,

- provided, of course, we get the Ok from our legal team.