It is not this time of year where the gardens get added attention with new flowers and trees planted?

Before we go any further, we have had a mishap with our mailing list - our server decided to "spring clean" , and we appear to have gone back several months on our address data base.  There may be some names left off the list, and some that should not be there.  Please excuse us, and if you have been left off, or need to be removed, please advise us. Also, if you know anyone that should get the WwW, allow us put them on the list.

We have had a large number of mailing list opt-in requests this month, which is pretty heartening, considering the subject is not particularly cosy.

Last month we discussed South Africa's leadership in the field of water care, and one reader asked why.

There is little doubt that we are quite free to research what we please here in South Africa.  If we wanted to make up a grass cutting gadget at home, test it on our lawn and then sell the design, we are allowed to do so.  In Australia, we would need a permit to work (and think) at home, a licence to operate a pencil sharpener, a competency certificate from the area health committee, an eye and hearing test, and a electrical compliance report on the power cable, even before one bolt is purchased. Not quite conducive to the free entrepreneurial spirit.

In 2000, while I was in Australia, I went into an electrical supply shop, and not quite familiar with their specifications, I asked for electric cable.

"Sorry Sir - If you don't not know what cable you need, I am not allowed to help you.  You must speak to an electrician."

The Hibberdene Spar Lilliput sewage system is still not functioning.  If you recall, we featured this system in November last year, and there was frantic activity for a short while. Our latest info indicates that sewage now overflows from one of the tanks and discharges directly into the stream.

Hibberdene Spar, we are informed, is not the owner, but Chase Properties, whose address and phone numbers are the same as Spar's.  It appears no-one wants ownership or responsibility for this system. Even Lilliput have distanced themselves, trying to blame Scarab.  Well, who does own the system?

Apparently "Build It" does. And they probably don't know it yet. 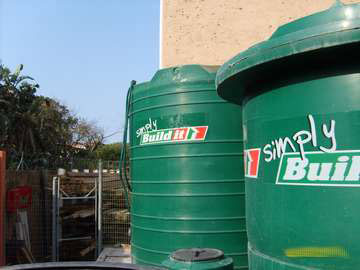 We are giving the owner's notice.  If they feel that what they are discharging into the stream is safe, then they would have no problem us pumping the same onto their forecourt / parking area. Ed

Protest action by sick residents in the Durban south area against the activities of petro giant Engen made national headlines recently.  eThekwini metro say that emissions from the refinery are well within international limits, and we have presumed, of course, that air / water samples are tested in the City's Scientific Services Lab (as featured in August's edition).

Also making headlines is that Engen have allegedly agreed to take over all of Shell's assets in Zimbabwe - (including some directors), and almost in the same breath they preach the following conditions on their website,

I digress. Our gripe with Engen is their two Ladysmith 1Stop filling stations on the Johannesburg / Durban N3 route.

Both Clear Edge systems were removed  nearly two years ago as they had failed.  We pressed the company for action as 60 000 litres sewage was being released into the environment, every day. Barry Sitharamand,  Engen's engineer informed us a month ago that two brand new plants had been installed and commissioned. And are working well.

We have it on good authority that the North bound 1Stop, final effluent is being discharged into the large dam, and that the dam is being disinfected with chlorine. Please note that you cannot disinfect the receiving water.  It is not only environmentally damaging the ecosystem, but quite illegal. Disinfection has to be done within the treatment plant, and a residual chlorine of no more than 0.25mg/l should be measured at the receiving water. Our estimate is more than 200.

And then the South 1Stop.  Final effluent has signs of Sphaerotilus natans (or sewage fungus) which indicates the system is overloaded. With this technology, you simply cannot treat sewage in less than 8 hours.

It must be accepted that when a mistake is made (the first Clear Edge systems), we learn.  We research. We ask questions and act on this. However, in Engen's case, they have not.

Barry took a huge risk, and he lost. We must point out that it is not his water that he is polluting, it's ours. It has been made clear to Engen, that this must be fixed quickly. We have also made contact with Wimpy (Ladysmith). After all, it is also their mess.

Congratulations, Barry. This was an easy choice for the third nominee as "Polluter of the Year" in the annual Fish Kill awards.

Should Barry and Clear Edge feel a little picked on, they should take brief comfort in knowing that they are not isolated.  Total PETROPORT - MOUNTAIN VIEW, near Harrismith, also has a failed system.

Our next challenge.  Ed

After Champaign Castle Hotel, in the Drakensburg mountains, had spent nearly a million rands on upgrading (and upgrading and upgrading) their plant, the supplier was asked if the plant would now comply. Sitting in the pub and slurping on a cold Heineken, the supplier allegedly replied. "If not, don't worry. I have friends in high places".

In 2006, Wisa selected several plants to visit during an organized field trip, one being the Lilliput system at the Inchanga Hotel. This is a lovely mountain setting. The grand old hotel still oozes colonial charm, with the amphitheatre styled terraces motherly overlooking the pool and recreation area.  Crisp, clear air really has a fragrance all of it's own.

As understood this sewage plant has never - ever achieved compliance. We are told that results are beginning to look good, and this is due to the system being maintained by Dikubu  Environmental,  a Joburg based company.  ( Water samples, as understood, are taken to the Scientific Services Laboratory - eThekwini Metro - and so we say no more).

To disguise anyone smelling a rat, the plant was given a thorough cleanup, washdown and a good almighty dose of Adcock Ingram's Jeyes fluid, thanks to Tiger brands. And the visitors did not seem to notice. 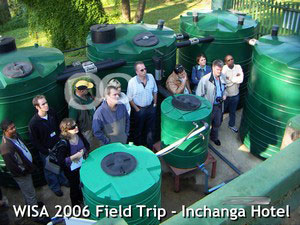 Gravel was telling Marlene how well he knew Mark Ross (Lilliput) and that the two of them went way back to the army days. However, we recall Mark Ross saying, in about 2001, that he (Ross) could not remember Gravel in the army, but that as long as Gravel remembers, it was 'good for business'.

On the morning of the 5th June 2003, the day the moratorium is placed on package plants, we were informed that DWAF was very unhappy with the final effluent quality and that there was to be a ban all further installations. Knowing this, we understand that a number of applications were hurried through, beating the deadline. One being the Clear Edge system at Shongwini Heights, as understood.

Almost a year after the moratorium on package plants was in place, Metro was asked if another meeting with all the plant suppliers could be organized.

"This is a DWAF thing, and maybe Mark Ross (Lilliput) should be contacted."

"Well, Gravel is pretty busy, but as him and Mark 'go back a long way', maybe Mark can speak to him."

Some 3 weeks before the moratorium is lifted on package plants, Mark Ross allegedly takes Metro out for lunch. As Mark would put it, "fortuously well timed".

Our information on Umgeni Water is at very sensitive stage, and would not be released until all the chickens are counted.

It matters not who is friends with whom. We all socialise because that's in our nature. When friendships negatively affect the environment, to allow the law to be broken and when fish die, this is simply inexcusable. The Champaign Castle example does not indicate a friendship, more like a servant.  Ed

Plaxo remains the most successful freeware, to help you maintain your email contacts. Keeping you in touch, no matter where you go. And as freeware, it is free! Link below.

(unless aliens are responsible )

Lilliput comes out as - Lollipop

This Analogy of a Smartie

This was sent into us by Steve, which we found relevant to end off with.

Mike Sutcliffe, eThekwini's city manager is often referred to as "Metro Mike" or "Mad Mike" and his merry men, and therefore labelled as M&M's (which are similar to the Nestle Smarties - wot-a-lot-i-got.) Steve says that this is eThekwini to a (smar) T.

"All the Rainbow colours, but suck up to them, and you find them full of the brown stuff."