More people have smelled the coffee in relation to critical water related issues, and the green guys are finally having a say. And not so much them being green, but because they are beginning to make sense.

On this note, we are not considered green, but rather brown, due to the stirring we do. And of course, wherever we go, a smell emerges.

Yip. It will be a good year!

Despite a rapid response from the Hibberdene Spar attorneys, we have seen no further action. Should we feel in any way, that we have been bluffed by legal jargon, we are prepared to take this to the next level. If the shopping centre still claims that the final effluent is safe for discharge into OUR stream, then they will have no objection to the same water being recycled onto THEIR parking area /forecourt.

Furthermore, on two occasions (20th & 24th December 2008) we found raw sewage being dumped into the stream. The treatment plant cannot be blamed for failing to treat the sewage, if it never gets it. Whilst we believe that the treatment facility fails on a number of tasks, it is the integrity of the owners / landlords / tenants (Chase Properties/ Hibberdene Spar / Wimpy) we find distasteful. They all knew that the site was under the spotlight, and have not done enough to solve the problem. Bar, of course, sending us a . . .

We have had a number of people, ranging from the greenies through to DWAF headoffice (not that they should be seen as opposite . . . ) requesting inclusion on our mailing list, which is pretty encouraging. An increasing number of people are asking for help with persistent sewage problems that never get solved, and as soon as we get evidence, we will publish these reports. We appreciate the faith that the public have in us.  We, all of us,  will win in the end.

Despite the many requests for information on eManti's Water Quality Management System, nothing has emerged. We will blame this on the festive season doldrums, but expect action when life returns to normal.

With the demise of Anthony Turton (from the CSIR), politics played a major role, and we always believed that politics should never been allowed to pollute the water industry. The previous apartheid government knew the value of clean water, and put in place a standard not many other countries could match. Water is politics, because the person that has the key to the water tap, has absolute power over the population.

However, should that water be polluted, that power is gone.  In fact, when people get sick and die, they cannot vote, pay taxes or both.

This little piece of natural beauty in southern Durban has become the dumping ground for sewage and chemical spillages. It reached fame recently when metal thieves removed portions of an electricity pylon. The pylon then collapsed, cutting power to the whole area, including several sewer pumpstations and  resulting in large scale "fish kill".

"In a statement yesterday, the municipality said the main reason for the fish deaths was the depressed oxygen levels from poor quality 'first flush' runoff from the catchment area." Natal Mercury December 31, 2008. ( Metro says flushing is bad. Ed)

Then, in the same article, Chris Fennemore (eThekwini pollution department)  said " the run off would have improved in quality, and the flushing out of the water hyacinth had also remedied the situation". (Metro says flushing is good. Huh ? Ed)

Years ago, we were involved with the Isipingo Municipality, and were regularly called out to fix the sewer related problems.  One pumpstation, just downwind from an influential upmarket suburb, had re-occurring storm related problems.  This was so bad that on several occasions we could do nothing, but switch the pumps off until the storm passed.

The problem was that many of the dwellings had connected the storm water down pipes to the sewer system, resulting in severe flooding of the equipment, choking up of sewer lines and a complete system failure.

Furthermore, sand, stones and other debris caused extensive damage to pumps - in one case pumps were replaced every six months!

Asked to report to council, we recommended that every house's rainwater / sewerage system be checked with a tracing die, and the offending owners be notified of the results.

Considering the suburb's large population of politicians, the response was disappointing, but not surprising.

The Durban Metro took over the Isipingo council shortly afterwards, and would have inherited not only the sewers, but also the politicians. (there is a difference?- Ed)

We must remind the public that a year ago, massive fish kill occurred in Durban harbour. Municipal manager Mad Mike Sutcliffe poked industry with a threat that those guilty would suffer severely. It was later found to be the municipality's sewer system that had caused the disaster.

Sorry, Mr. Fennemore - it is simply too late for those fish. You have missed the boat. And I predict that, when there are no more fish, you will have fixed the pollution problem. Ed (see blending)

The term, blending, has been adopted within the wastewater industry. This, from the Environmental News Service in America refers:

"The proposal, announced in November 2003, centered on a practice known as “blending,” which allows operators to mix fully treated sewage with partially treated sewage and storm water and bypass secondary treatment, releasing the blend directly into the environment"

'The Bush administration’s proposal would have allowed wastewater treatment plants to use the practice virtually any time it rains."

And,  from the mother of all polluters, the USA placed a ban on blending.

The announcement signaled a rare victory for environmentalists, who contend the policy would roll back the Clean Water Act and harm public health and the environment.

Is this what "first flush" really means to us here in runny South Africa? Ed

The cholera crisis in Zimbabwe has now spread to South Africa, Botswana, Malawi and Mozambique, and this can be blamed on one thing - politics.

The cholera bug was first brought into Rhodesia (now Zimbabwe) during the bush war. Comrades were trained in North eastern Africa, where cholera has existed for hundreds of years, and brought it back when returning to fight. It remained dormant for many years, because the conditions were not ideal. With raw sewage mixed with tap water, the conditions are now ideal, and thousands of people have died, and many more will do so.

Another human super-killer is the Mosquito, which thrives in dirty wet conditions. The mossie larvae do not mind sewage contaminated water where oxygen levels are depleted, because they do not breath under water, like fish do. And because there are no fish (having all died of sewage pollution in the above mentioned lagoon), the larvae have no natural enemies.

Try Plaxo. This software allows you to change your contact details, address or occupation without losing touch.

It's brilliant and it's free. Link below.

And No.  We do not get commissions. Ed

Spar (Afrikaans for save)

I know of no one who goes into a Spar shop to save.  They go in to spend!

This year, we will look at new products, and fresh ideas on environmentally good practices.  One item which "we" seem to have avoided like the plague is rainwater harvesting.

Once you have the equipment, it is free water, without chemicals, taxes, pollution and politicians. Innovative methods of removing leaves and other roof debris are now standard  (see Eco Tec Website) and makes the whole process that much easier.

This new development is worthy of mention.
So concerned about the state of government infrastructure, the department of health has seen fit to replace a failed package plant at a rural clinic on the KZN South coast.  The existing plant, a Clear Edge system, is to be replaced with a more reliable and trusted brand, as a matter of urgency. 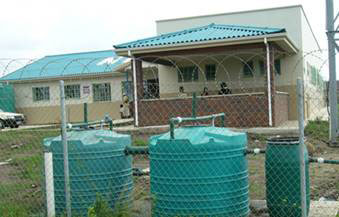 Featured on Clear Edge's / Zenith's  website, it is the only system, seen above, to be installed at a clinic in this area (see Zenith website). We will report back with all the details next month.

Thanks - Dept of Health, you do care! Ed

I know this one has done the rounds a trillion and four times, but hopefully you would have heard it for the last time  - right here. And fine send off too!

Politics - ( poly = many) and (ticks = blood sucking parasites) and we add (which, when full, fall off and do nothing).